Get the Book “Up and to the Right” by Craig Toomey

The Story of John W. Dobson and His Formula Growth Fund. The first-ever look at one of Canada’s greatest growth investors and champions of entrepreneurship.

In 1960, Montreal money manager John Dobson launched an informal investment club with a close group of friends and associates, including future prime minister John Turner. His Formula Growth Fund would go on to become one of North America’s most successful investment funds, consistently outperforming the Dow Jones Industrial Average and attracting the likes of legendary investor Sir John Templeton.

Up and to the Right tells the story behind John Dobson’s investment success as well as his many contributions to entrepreneurial education. Craig Toomey provides valuable insight into Dobson’s unconventional but disciplined investment approach, his uncanny ability to predict winning stocks, and his unwavering faith in the stock market despite its many ups and downs. Coinciding with the 60th anniversary of the Formula Growth Fund, this revised edition brings the company’s fascinating story up to date, explaining how the Formula Growth Fund has doubled in price since the first edition was published in 2014. It also describes how through the broadening of their successful hedge fund platform and expansion into Asia, assets under management have almost tripled. Building on the highly popular investment case studies featured in the first edition, it also includes more than a dozen additional and more recent examples, providing an invaluable educational tool for teaching students the art of investing.

An initial investment of $10,000 made in 1960 has grown in value to an astonishing $12 million – a return on investment that speaks to Dobson’s legacy.

Based on interviews with Dobson as well as with dozens of members of his extensive network of friends, colleagues, and investment professionals, Up and to the Right is a fascinating story about a great Canadian who believed deeply in self-reliance and free enterprise as well as the value of friendship, pursuing one’s passions, and working for the greater good. 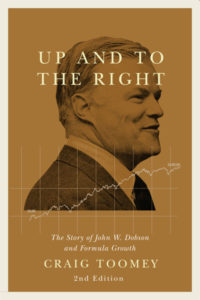 Send us a Request to Get your Free Book!*