Recognizing the volatility and limitations inherent in long-only growth stock investing, FG launched the Formula Growth Hedge Fund (FGHF), a U.S. equity long/short platform in 2002. This new strategy allowed FG to increase its portfolio management capabilities and flexibility by adding a variety of new tools such as heightened risk management, short selling and variable market exposure. Further to its success with the FGHF, the global equity long/short Formula Growth Global Opportunities Fund (GOF) was launched in January 2009. This strategy builds on the core long/short experience FG built over the years by focusing on growing companies based in or benefiting from the rise of the Asia-Pacific region.

In 2011, FG conceived and developed the Alpha platform with the launch of the FG Alpha Fund. This strategy is a directionally capped equity long/short fund designed for institutional investors pursuing lower volatility.

In March 2014, the Formula Growth Focus Fund (FGFF) was launched offering a concentrated portfolio with a limited amount of high conviction positions and opportunistic exposure. The FGFF allows the manager discretion to be positioned net long, net short or hold a high cash balance.

FG has operated in Montreal since 1960 and today has research offices in New York City and Hong Kong as well. These international research offices significantly increase global research capabilities. FG established an advisory partnership with the Hong Kong based firm, the PheonixInvest Group Ltd led by James Soutar in 2009. In February 2016, FG acquired a controlling interest in the firm. This relationship provides the research team, among other benefits, access to a local office and an established network of buy and sell-side professionals in the Asia-Pacific region.

John was born in Montreal in 1928. He was the son of a banker who rose through the ranks to become President of the Royal Bank of Canada. While John was of Nova Scotia heritage (his father from Sydney and his mother from Truro), he grew up in Montreal and graduated from McGill University with a Bachelor of Commerce in 1949. He received his Masters of Business of Administration from Harvard in 1952. 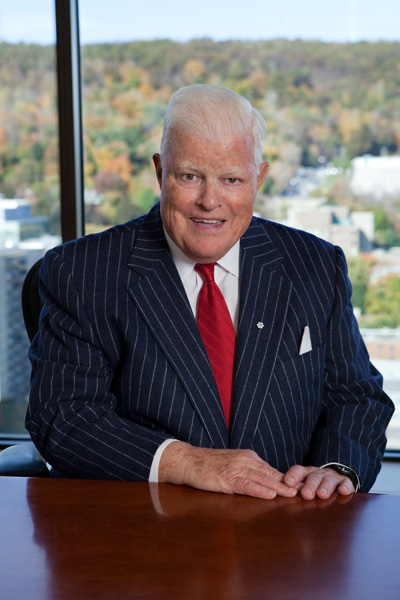 John began his formal work career with Dominion Engineering, and then the Montreal investment firm, of C.J. Hodgson. This background prepared him to venture on his own in 1960 when he founded The Formula Growth Fund, one of Canada’s earliest mutual funds and one of the most successful long-term mutual funds in Canadian history.

While studying for his MBA, John attended the small business class at Harvard University. It was from that early exposure and his teaching experience that he developed the vision of University involvement in entrepreneurial studies and community entrepreneurial outreach as an effective stimulant to economic development and employment generation. John began teaching the business case method in the late 1950’s in a program sponsored by the Montreal Board of Trade along with a number of Harvard Alumni and other Montreal executives. This program eventually found a home at McGill in what is know today as the Executive Development Institute.

In 1986, John established The John Dobson Foundation to “help educate the public with respect to the free enterprise system and entrepreneurial activities in Canada.” His Foundation has supported many community entrepreneurial efforts including The Canadian Institute for Advanced Research, The Youth Employment Services Foundation of Montreal (which supports in excess 2100 marginalized youth annually), and Junior Achievement. He was the original sponsor of the Association of Collegiate Entrepreneurs (now called Enactus Canada), a national student body which advocates entrepreneurial education. The Foundation also supports many Canadian economic “Think Tanks.”

The first and flagship activity of the Foundation was the creation of the Dobson Centre for Entrepreneurial Studies at McGill University in 1989. The Foundation has created the McGill Entrepreneurial Skill Development Program and today there are 13 sections of entrepreneurial studies in programs in Business, MBA, Engineering, and Science. In 2020, to push forward John’s vision for an entrepreneurial Canada, the Foundation donated $3-million to help the Centre continue to foster innovation and strengthen support for students, faculty and community members interested in entrepreneurship. This followed a donation of $2-million for the McGill X-1 Accelerator program in 2017.

The John Dobson Foundation has supported entrepreneurial development at more than a dozen Canadian universities. In addition to the enhancement of entrepreneurial education at specific institutions, John’s involvement has resulted in the establishment of regional and national networks of educators and small business interveners creating unprecedented synergy and cooperation.

Over the years, John also applied his extensive management skills and business acumen in a variety of voluntary positions including: a member of the Fraser Institute Boards of Trustees, a member of the International Advisory Board of the McGill School of Management as well as the Audit and Finance Committee of McGill University. John was also an Advisor to the National Citizen’s Coalition.

He was awarded an honorary Doctorate from McGill in 1996, another from Concordia in 2002. He was awarded McGill’s Management Achievement Award in 1992, and in 1997 John was named to the Order of Canada.

In addition to his commitment to the community, education, and entrepreneurship, it is golf that had been his life long passion. He had served as a member of the executive committee and Director of both the Quebec Golf Association and the Royal Canadian Golf Association, and as an honorary Director of the Quebec Golf Professionals. He had played almost 700 different golf courses worldwide.